In what has been a strange and challenging year we are making sure to celebrate the wins when they come! As awards season 2020 comes to a close, we are humbled to have won 36 accolades this year!

Thirty of our awards were at the World Beer Awards, twenty-six of which were in the fiercely contested Taste category. Our beers were judged alongside over 2,200 beers from more than 50 countries worldwide. The remaining accolades were in the Design category, collaborating with Greenhouse to create eye-catching, and now award-winning, packaging for our exciting range of beers.

Our biggest awards were for:

Ireland’s Best Lager Helles/Münchner is another accolade we received for our Rye River label Helles Lager. 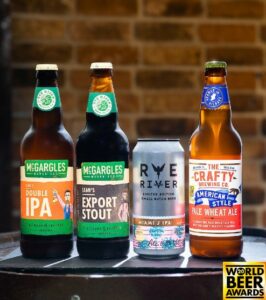 To top it off, we won 2 Gold Medals, 11 Silver Medals and 7 Bronze Medals. This is our best performance (so far!) at the World Beer Awards and for the second consecutive year we are The Most Decorated Independent Craft Brewery in the World.

Founder and Managing Director Tom Cronin had this to say: “We are elated with our success at the 2020 World Beer Awards, in particular, our 4 Best in Style awards, including Best American Style IPA for the second consecutive year. I believe our success is driven by our dedicated team of brewers and the wider production team, our persistent pursuit of perfection in process and our uncompromising focus on quality, all of which culminate to deliver consistently exceptional beers. Our accomplishments at the 2020 WBAs have acted as a significant endorsement for our beers on the international craft beer stage.”

Shortly after the World Beer Awards, our winning streak continued at Blas na hEireann. We were awarded 5 further accolades for our retail exclusive brands;

Just recently we were awarded 1 Star at the Great Taste Awards for Solas Belgian White, exclusively brewed for Tesco Ireland.

2020 has been our most successful to date and it highlights the skill and dedication of our wonderful team. Never complacent though, we’ve already got our eyes on the prizes for next year!

The Herd is our 4th Rye River Seasonal release of 2020 and it’s a good one! Nine freshly emptied ex-Buffalo Trace Bourbon barrels filled were with our Belgian inspired Quad Ale. It’s taste is lead by its depth of malt character with a touch of caramel and seamlessly blended with deep notes of Cherry, Vanilla and Bourbon. Savour and share.

Because there were fewer than 2300 individually numbered bottles produced, you can expect a stampede for this warming treat! Sláinte! 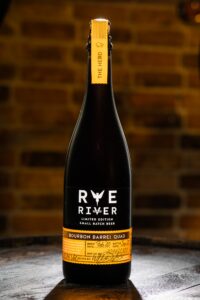 See below for current stockists: